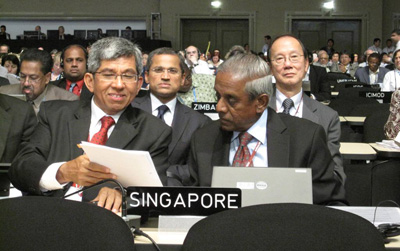 Senior Minister S Jayakumar and Minister Yaacob Ibrahim at the 16th UNFCCC Conference of the Parties (COP-16) in Cancun, Mexico.

Climate change is one of the most complex long-term challenges we face today. For all nations, mitigation efforts impact policies on environment, economy and energy security. They are politically difficult. This is because the measures are costly but the benefits are not only uncertain but would accrue over the long term and then too for the global commons. Adaptation measures require substantial funding and the costs could increase in the long term if climate change is not effectively mitigated.

Since no single country can solve climate change, the only workable approach is a collective one. All countries must negotiate in good faith to arrive at an acceptable and workable global agreement. To achieve this, all countries must play their part and do their fair share.

Last year’s Copenhagen Conference did not lead to a comprehensive agreement. But the Copenhagen Accord did represent a modest step forward. Although not perfect, it contained important elements that can help the negotiations. Hence, Singapore, together with 139 other Member States, associated with it to move the negotiations forward.

“United World” scenario. Under the first scenario, there is convergence and political will among all parties to address climate change. I would describe this as the best-case scenario of a “United World”. Under this scenario, there is agreement on a comprehensive, global Legally Binding Agreement (LBA) to be reached not now but later in 2011 or 2012. The LBA will provide the foundation for a multilateral, rules-based climate change regime. This is an optimistic scenario and may not be immediately achievable. Nevertheless, we must aim for such a scenario because it is the best way to deal with the challenges posed by climate change. .

“Muddling Along” scenario. In the second scenario, there is some divergence but also some convergence. I would describe this as a scenario of “Muddling Along”. Under this scenario, there may be no clarity in the approach but there could be some convergence on certain issues, which could lead to concrete decisions adopted at each COP. There could also be convergence on substance using the political understandings reached at Copenhagen Accord as a framework. But public pressure in our countries may demand more action than is delivered by our process and this could lead to tension among the major players. This looks like a realistic scenario, but it is not a satisfactory one because it is not sufficient to be muddling along. We have to aim higher than that.

“Conflict and Cross-fire” scenario. In the third scenario, there is divergence and dissension among all parties, especially major players. One could describe this as a scenario of “conflict and cross-fire”. In this scenario, there is no clarity in approach between a LBA and COP decisions and there is divergence on many substantive issues. In such a scenario, the UNFCCC fails to deliver an agreement, which in turn could lead to public pressures to take action through other channels, such as unilateral or plurilateral measures, like border trade adjustments. One could say that this is a negative or pessimistic scenario. But not an impossible scenario. This is a scenario that we have to avoid at all cost, because such a scenario will represent the failure of multilateral negotiations and of the UNFCCC.

These three scenarios are not scientific projections. They are rough sketches that foretell possible stories of the fate of our collective endeavours. The future direction of our process depends on what we decide to do in Cancun. Two inter-related factors will determine which scenario will turn out to be reality. The first is political will, in both developed and developing countries, to resolve the challenges posed by climate change. The second is political convergence on the key issues in the negotiations. The two are related. If there is political will, then we can create the convergence necessary for a global agreement.

It is important that we look at the negotiations from the broader objectives of limiting global temperature rise and ensuring that developing countries have the capacity to adapt to climate change. In this regard, we must continue our effort to reach a comprehensive global agreement that is legally binding.

A global LBA is essential as it provides the foundation for a multilateral rules-based system. It ensures that commitments and pledges made are not based on political understanding but have a legally binding character. The LBA does not absolutely guarantee the implementation of all commitments and pledges. However, it will provide reasonable assurance that there will be reciprocity of actions among Parties and instil confidence in countries to implement their own. This applies not only to commitments on mitigation, but also those relating to finance, capacity building, adaptation and technology transfer. Such a system is necessary for the success of our collective effort to address climate change.

In this regard, it is important that as we pursue a “Balanced Package” in Cancun, we must have clarity that our end goal is to reach a legally binding outcome. Whatever we achieve in Cancun, and whatever be our next steps, it is imperative that these elements or decisions will eventually be stitched together in a legally binding nature, without which, there can be no guarantee of mitigation actions, nor can there be guarantee of the support provided.

We are at an important turning point in our negotiations. Climate change is a global common that will affect all of us. Many pledges are for 2020. So, the clock is ticking. As we draw nearer to the end of the first commitment period of Kyoto Protocol, it is important to send a strong political signal here in Cancun on the continuity of the Kyoto Protocol. How we choose to proceed, and what outcome we can have, is entirely up to us as sovereign states. If we have the political will, we can avoid the worst case scenario. We should also avoid a scenario of muddling along. If there is political will, we can achieve the best-case scenario of a climate regime built on a legally-binding global agreement. But to get there, we have to lay the foundation here in Cancun. Let’s work together towards a successful outcome in Cancun.